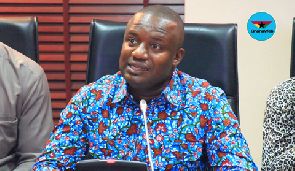 He says the Energy sector is very critical, sensitive, key to investor behavior in Ghana’s economy and that propaganda to misled the public will fail.

Mr Jinapor who is also the MP for Yapei Kusawgu was responding to claims by John Peter Amewu that the hacking down of a transmission tower close to the GRIDCo offices within the Tema enclave, is a clear sabotage on the Akufo-Addo Administration.

A virtually frustrated Minister, who inspected the damage caused at the Ghana Grid Company (GRIDCo) transmission tower sites at Tema assured that the perpetrators if found, will not go unpunished.

“How can human beings do this to our motherland? Any political party that will have some element of association with such activity is not worth being in our country? We have already detected that chemicals are being put on all the towers along this line. The intention is to destroy them in the future. What will merit someone to do this, we cannot be subjecting our own country to this,” he lamented.

He told reporters security at all GRIDCo installation sites across the country is being beefed up to forestall similar occurrences.

But in a sharp response, former deputy Power Minister, who was speaking on an Accra based Radio XYZ, said, first the claims made are mischievous and questionable.

He said: “The Minister must be advised that the Energy Sector is not for ad hoc decisions or loose comments. So if you are privileged to be appointed to head the sector, you must remain level headed, weigh what you say in public and be mindful of the signal it sends to key stakeholders in the economy.

He added, ”You must exhibit high level of moral and intellectual judgement”

Mr Jinapor explained that pylons are heavily built masts for carrying high transmission cables that cannot be easily pulled down. He also questioned why the so called saboteurs targeted the one close to the GRIDCo facility in Tema and not several ones in the bushes.

The former Deputy Power Minister, noted with concern conflicting claims by the Minister that those involved sprayed aerosol, a chemical to loosen bolts and nuts to easily dismantle the pylons yet ended up using hacksaw to pull down the heavy structure.

He asked, “was the pylon cut with hacksaw blade before the bolts and knots were loosened or vice versa?. When you want to cut the metals, you don’t need to loosen the knots. So the critical question. What is the Minister really saying?”

Mr Jinapor said there is a need for thorough investigations especially because the heavy investment by government into GRIDCo operations cannot be put under such threats and falsehood.

He noted that government’s admission that the destruction of the pylon seriously affected power distribution to parts of Accra, Kumasi and the North.

“Don’t they have cameras at GRIDCo’s backyard. But the major issue that has exposed the NPP big time is that just recently, the Minister came to Parliament and told the House that Karpower is a waste of money. We don’t need them and that Ghana is paying for nothing produced. But yesterday he admitted the damage is affecting evacuation from the facility John Mahama invested in and has resulted in massive load shedding, Mr Jinapor added.

The former Minister said any attempt to bring the galamsey style into solving the Energy sector problems will expose Mr Amewu and he will fail.

“I advise that he stays focus and be truthful,” he concluded.

Meanwhile GRIDCo has since restored power supply to all the areas that were plunged into darkness following the destruction of some pylons.