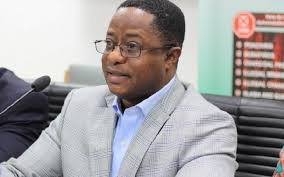 According to him, Mr Jinapor wish Ghana returned to the prolonged power crisis the country witnessed during the previous administration, and so his engagement in propaganda by saying that Ghana has been hit with power crisis due to recent power outages in some parts of the country.

Some parts of the country experienced blackouts last Tuesday and Wednesday following a surge in power that affected the Accra Central Bulk Supply Point, thus, cutting power supply to Accra Central and its environs.

The situation was compounded by the diversion of 330kV Aboadze-Tema transmission line due to the ongoing interchange at Pokuase.

GRIDCo, in a series of press releases, explained that the outages were as a result of the construction of road interchange at Pokuase, which has necessitated the relocation of its 330kV tower on the road.

But commenting on the issue, Mr Jinapor, who is also a Member of Parliament for Yapei/Kusawgu said all explanations provided by the government, so far, are palpably false as the blackouts recently experienced across the country was due to a huge financial burden in the energy sector.

He insisted that the governing New Patriotic Party (NPP) must be truthful to Ghanaians and admit that the power rationing has become necessary due to the debt owed by major players in the power distribution chain.

He said the construction of the road interchange, as claimed by the government, was far halted before the beginning of the blackouts.

“Because you don’t have money, today, when we are experiencing ‘dumsor’, you tell us that the very work that has been halted is responsible for the load shedding. It doesn’t make sense.”

However, speaking to Oman FM on Tuesday, Energy Minister, John-Peter Amewu wondered why the former deputy minister could be talking about ‘dumsor’ when the country currently has enough power.

“What I’m telling you is that we have generation sufficiency,” he stated.

Asked what he made of John Jinapor’s criticism, Mr Amewu said: “These are people who don’t wish anything good for this country.”

“What they think will happen I’m promising you will not happen, ” he added

He indicated that the energy sector is currently being managed by competent persons saying, what Jinapor and his colleagues wish for Ghana would not happen.