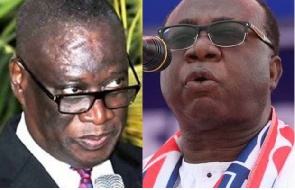 The Institute for Energy Security (IES) has said it is alarmed at the complete breakdown of control at the top hierarchy of the Ghana National Petroleum Corporation (GNPC), as evident in the war of words between the Chief Executive Officer (CEO), Dr K.K. Sarpong and the Board Chair, Mr Freddie Blay, over procurement-related issues.

According to the IES, “The turf war is ugly, undesired and greatly undermines the smooth running of Ghana’s oil company, the GNPC.”

The heated misunderstanding between Mr Blay and Dr Sarpong is in connection with the recruitment of a Procurement Manager.

Dr Sarpong, in a letter, accused Mr Blay of overstepping his boundaries by ordering the Chief Finance Officer (CFO) to proceed with the recruitment process without recourse to him (Dr Sarpong) even though the CFO is a subordinate.

Dr Sarpong said he saw the action of Mr Blay as interference and accused him of using his role as the national chairman of the governing New Patriotic Party (NPP) to execute functions at GNPC without recourse to professional standards.

In his response, Mr Blay challenged the CEO on his assertions, insisting that the Board has the authority to recruit officers. He subsequently requested the withdrawal of the letter written by the CEO to the CFO, to affirm the recruitment of the procurement manager.

“It should be clear to you that the Board and not the CEO is the appointing authority. Professionalism, which you refer to in your letter, requires that the CEO of a state-owned entity operate within and respect the law.

“While you must take the initiative, you are legally and professionally obliged to seek approval of the Board for all recruitments and any restructuring,” Mr Blay stated.

He added: “The truth is, under your leadership and watch; our corporation has had no Procurement Manager for so long in spite of several directives from the Board to your office to take the necessary steps to fill that vacancy. This dereliction of duty can simply not continue.

“Playing the blame game, which you are now engaged in, will not pass. The buck stops with you Dr K.K. Sarpong, as the CEO. Please understand and very clearly, that the recent Board directive and two-week ultimatum on this matter was conveyed to the Chief Finance Officer, also in her capacity as Acting CEO, when we held that particular emergency meeting. The ultimatum stands and it is up to you to comply or chose to ignore it.”

The IES, in a statement, said the turf war between the two gentlemen has the potential to weaken Ghana’s negotiation with independent oil companies (IOCs) adding that the wrangling could equally make the GNPC unattractive to potential investors and partners.

The statement further said: “This Boardroom power play is very dangerous to the country’s economy since GNPC’s share of our offshore oil and gas production is a vital component of Ghana’s annual budget.

“One would have thought that the current GNPC Boardroom energy now being displayed publicly and negatively, could have been channelled into meeting the mandate of exploring and producing oil on its own to reduce the reliance on IOCs, so, the country benefits from its petroleum resources.

“For GNPC to meet its mission and vision to be a stand-alone operator in the next few years, its leadership, staff commitments to a common purpose, and internal control system must be apt.

“Procurement irregularities are serious and can lead to possible prosecution, to the extent that such irregularity can lead to causing financial loss to the state, and trust in state enterprises.”

To this end, the IES has called on the Ministry of Energy (MoE), the Public Procurement Authority, and the Attorney General (AG) to look into the possibility of infractions in relation to the functions and mandates of the topmost officials of GNPC, and take a decisive step.

The IES has further called on President Nana Addo Dankwa Akufo-Addo in whom the power to appoint leaders to state institutions is vested, to call the two gentlemen to order to save the country from embarrassment.